A first week of campaigning for ageing with equal rights! 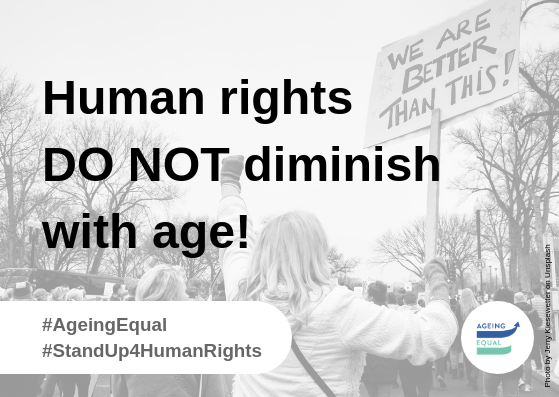 On 1st October, the International Day of Older Persons, we launched the global anti-ageism campaign #AgeingEqual that will run until the 70th Anniversary of the Universal Declaration of Human Rights, reminding us that ‘human rights do not diminish with age’. But what have we achieved during the first week of our campaign?

Our movement is growing

Ending discrimination requires collective action. Given the magnitude of ageism, reaching a critical mass of activists will be critical if we want to tackle age discrimination. Let’s join forces to create a society for all ages!

Things got off to a good start with the #AgeingEqual campaign being supported by the United Nations (U.N.) Independent Expert on the Rights of Older Persons, the United Nations Economic Commission for Europe (UNECE), the U.N. Office of the High Commissioner for Human Rights, the World Health Organisation, several members of the European Parliament, many civil society organisations – including among others Human Rights Watch, as well as experts, human rights advocates, academics, and individuals.

Do you want to join us? Find out 3 Easy Steps To Become An Anti-Ageism Champion

We have gathered examples of ageism

Do you want to share your story? Contact us to give visibility to more examples of age discrimination with a blogpost. You can also use the hashtag #AgeingEqual to add your voice in social media!

We have grown understanding of ageism

And here are some highlights based on the words of our growing list of anti-ageism campaigners across the globe!

“Law against age-based discrimination is not enough – tackling ageism means changing how we all think, feel and act towards age and ageing”

“The “premature mortality” target has the dubious status of being the only Sustainable Development Goal which explicitly and unashamedly discriminates against a particular group of people. It is hard to imagine the same being permitted with reference to ethnicity, sexuality or disability.”

“We have a political system that does not grasp demographic ageing except as a cost. There is no attempt to support and encourage older people to live independent, fulfilling lives and be active citizens in the wider society.”

“But as it turns out, “adults” does not even mean people aged 65+. Older people are excluded from the refund, regardless of the severity of their situation. The Flemish Elderly Council considers this flat-out discrimination, and calls upon minister De Block to take action to undo this infringement on the human rights of older people (i.e. the right to equal standard of health, without discrimination on age)”

“Age discrimination is the only form of inequality that is widely accepted as normal, legitimate and justifiable, and age categorisations are largely seen as useful or even necessary. These include age limits for volunteering or job retraining, which persist while at the same time the European Union aims to extend working lives and promote active ageing!”

“What is missing now is a convention for human rights for older people but it is a challenge to get that into place. It seems more difficult than the introduction of the previous conventions. It is, however, necessary because of the ageism shown to older people in my country. A law against age discrimination is not enough.”

“Rhetoric is easy. #AgeingEqual is so much more.”

Ashton Applewhite, This Chair Rocks, US

Thanks to all of you who helped us kick start dynamically the #AgeingEqual campaign. All of the above would not have been possible without your support and echo!

The next week (8-12 October) of this 70-day campaign that will be dedicated to the intersection of ageing and gender. Your further support and input to the campaign will again be crucial.

Together We Can Make A Difference!

Share your story using the hashtag #AgeingEqual
and help us shine a spotlight on ageism.