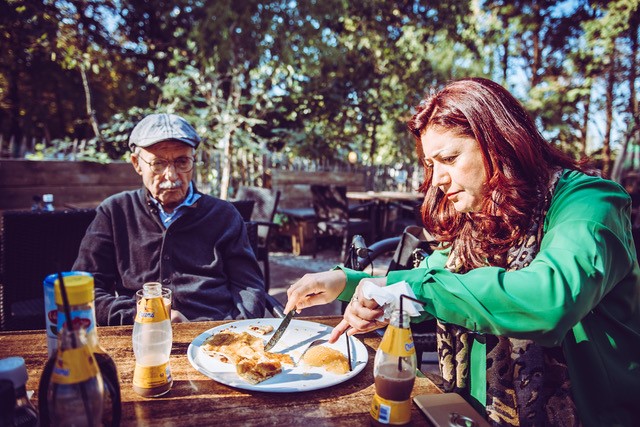 This testimony is extracted from an interview of Fatoş Ipek-Demir by Linda van Ingen published in Dutch here. Photo by Marion Duimel.

There was no good place for a Turkish man with dementia. That has to change,’ says Fatoş Ipek-Demir, founder and coordinator of OMAZ, the Elderly Migrants Foundation.

“Elderly people with a migrant background cannot be reached with a call on a digital platform or with a letter. You literally have to press other buttons to reach these groups. You have to offer attention in their own language, via key figures. Entice them to participate. They miss the regular activities on offer.

‘We cannot find them’ is not an argument. Then you have to look harder. Make a call, drop by a women’s group. Don’t focus on the mosque, not everyone goes there. Offer customised solutions. Everyone has different interests.

Activities in a community centre or nursing home can serve as a stepping stone to formal care. This way they can get a taste of it.

Nursing homes are totally unknown territory. They are buildings where you are dumped, where everyone eats pork and only white carers work. When my father moved to an Islamic nursing home, all kinds of acquaintances came by with questions. It was a kind of ‘monkey watching’. They had no idea.

Now he is the first Turk in a completely Dutch house. We as a family had to explain various things quite often, for example that halal food is not necessary in his case.

Asking questions back and forth is of the utmost importance. My father has other wishes when it comes to personal hygiene, for example. His main carer who is from an immigrant background herself, understands his needs best.

Involving each other and being honest when you can’t do something: that’s important to me. Consultation with the staff is important. I also play an active role in care, as do many other Turkish daughters. I cut his nails myself, for instance.

As my mother’s death approached, the staff realised that they were completely unfamiliar with the Islamic rituals involved. They asked me to write something about it. That one A4 sheet gave them something to hold on to. The next day I came and saw that one of the two shower rooms had been locked and had a note on it saying “temporarily out of order”. They had scrubbed it thoroughly, with a view to my mother’s final care. I had explained that this final cleaning was very important. Asking, being open – that is crucial. They took good care of my mother and us.”

Older migrants have the right to be treated with respect

Fatoş Ipek-Demir is the founder and coordinator of OMAZ, the Foundation for Older Migrants on the Move. https://www.omaz.nu/