When older people flee their homes from danger, ageism is a barrier to accessing help 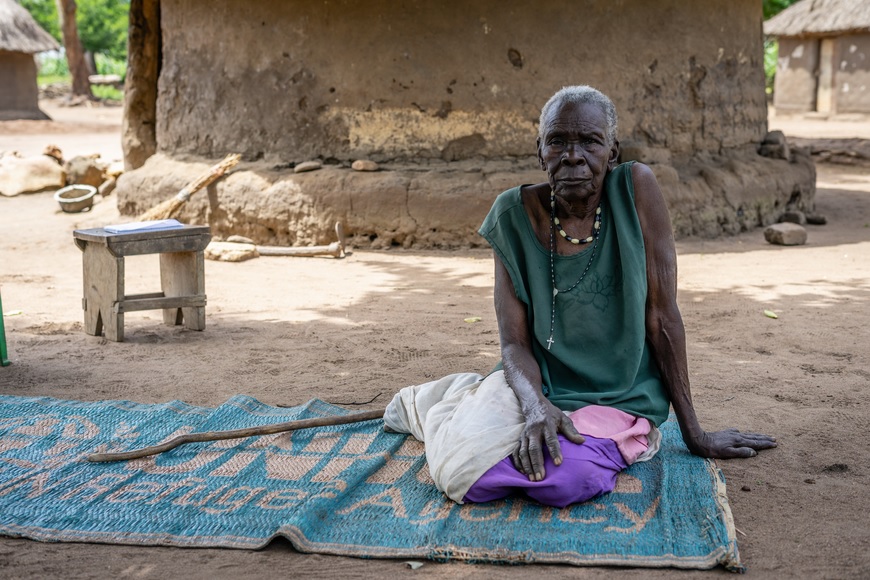 Based on evidence from Helpage International, older people are more at risk during forced displacement

“We are not given any respect, support and space in decision-making processes. In a recent seed distribution by aid agencies, I was not registered as they said I have no energy to farm.”

Philip from South Sudan has been displaced by conflict three times, fleeing to Uganda. In both Uganda and in his home community, he speaks of being regularly discriminated against because of his age and disability. He now campaigns to change these attitudes.

Philip’s experience is not uncommon. Nyatuong, who lives in an internal displacement camp in South Sudan, said: “Our participation in decision-making processes here in the camp is minimal. We  feel we are being discriminated against because of our age.”

Samira, who has lived in Gaza since the 1970s, says her friends do not speak about the age discrimination they experience “probably because they feel shame about it”.

Missing millions: how older people with disabilities are excluded from humanitarian response found that in contexts of displacement and emergencies, the attitudes of healthcare staff and humanitarian actors were a barrier to older people with disabilities accessing healthcare and assistance. Older people have been turned away and told they cannot be helped because of their age, or are forced to stand in long queues in extreme temperatures to wait for aid.

When older people are displaced and lose control of community resources and assets, their role and respect within the community diminishes, according to a separate study by the Overseas Development Institute, HelpAge International and Age International. It found that older people were seen to be less important and powerful without control of these assets, and so attitudes towards them changed.

This change was exacerbated by the way aid agencies operate in contexts of displacement. They often empower groups of younger people as the focus of new community governance structures set up as part of humanitarian responses. This approach excludes older people from accessing information and community-level safety nets.

It is not surprising that these changes in community status, and consequently the change in attitudes of older people’s families and communities towards them, have a negative impact on older people’s mental health. Displacement, combined with a lack of autonomy and respect, makes older people feel depressed, marginalised and isolated.

This issue is not only one of mental health, but more broadly one of human rights and of structural ageism, which leads to marginalisation, poverty, and the abuse and neglect of older people.

When older people migrate – whether by choice or, as is often the case, because of conflict and disasters – host communities, governments and humanitarian agencies often overlook them. These ageist attitudes, whether recognised as such or not, deny older people their rights to humanitarian assistance and protection. Rights to essential services, such as accessing food, clean water and sanitation and healthcare, are not upheld.

It also means older people are rarely asked for their opinion or input into humanitarian agencies’ response plans and activities, or given the opportunity to participate in their communities.

Very early findings from a rapid needs assessment carried out by HelpAge global network member COSE after Typhoon Mangkhut hit the Philippines found that 93% of older people had not been consulted by any humanitarian agency about the relief services provided to them.

Ageism can leave older people excluded from global humanitarian policies – working to ensure this is not the case is essential in challenging prejudice and changing the way people think, feel and act towards older people.

The inclusion of older people in the Global Compact on Refugees, for example, is a key step to ensuring older people are considered in displacement. But changes are still needed in the knowledge, understanding and attitudes of a wide range of actors if the situation for older people in these contexts is to improve.

Human rights have no age limits. We are all equal in dignity and rights. This includes older people who have been forced to flee their homes. Grigoriy, a campaigner in conflict-affected Ukraine calls for “a perfect world where there is respect for each other regardless of age”. We should follow the lead of older human rights campaigners like him who have continued their work to change attitudes and behaviour towards older people for the better, even when displaced and living in extremely challenging circumstances.

Madeleine McGivern is responsible for leading on HelpAge’s global humanitarian advocacy strategy and priorities, and for working with country programmes, network members and partners on all aspects of their humanitarian advocacy to ensure older people are able to access their rights to humanitarian protection and assistance. Madeleine co-runs the FIND network, for women interested or involved in development.

HelpAge International helps older people claim their rights, challenge discrimination and overcome poverty, so that they can lead dignified, secure, active and healthy lives. Our work is strengthened through our global network of like-minded organisations – the only one of its kind in the world.